A new measurement, made using radio interferometry, argues that the distance to the Pleiades star cluster measured by ESA’s Hipparcos satellite is decidedly wrong — and that ground-based astronomers had it right all along.

Last week I spent some blissful nights observing from rural Maine under pristine skies. In the wee hours I could see that familiar celestial landmark, the Pleiades star cluster, rising in the northeast over a stand of pine trees. They looked so delicate and serene — hardly the subject of a controversy that has nagged at astronomers for 1½ decades.

Open star clusters like the Pleiades and Hyades are perfect proving grounds for models of stellar evolution because their stars all have the same age and composition yet exhibit a wide range of masses. But for these models to work, it’s critical that astronomers know the clusters’ distances precisely.

Enter Hipparcos, a small orbiting observatory launched by the European Space Agency in 1989. Its name is both an acronym for High-Precision Parallax Collecting Satellite and a namesake for the ancient Greek astronomer/mathematician Hipparchus of Rhodes.

To gauge the distances of stars, Hipparcos used a technique already familiar to astronomers: trigonometric parallax. The spacecraft measured the position of roughly 120,000 nearby stars from various points along Earth’s orbit to within about 0.001 arcsecond. Far more precise than possible with ground-based telescopes, these measurement sets revealed tiny shifts of nearby stars against the background of more distant ones. A star that’s 1 parsec (3.26 light-years) away exhibits a positional shift of 1 arcsecond over a baseline of 1 astronomical unit (the mean Earth-Sun distance).

So, in principle, Hipparcos should have provided accurate parallaxes to stars up to many hundreds of light-years away, easily refining the distances to nearby open clusters such as the Pleiades (Messier 45) and Hyades clusters in Taurus, the Beehive (Messier 44) in Cancer, and the Alpha Persei Cluster.

Eager astronomers jumped at the mission’s results when released in 1997, but the “Pleiades problem” arose almost immediately. As detailed in a pair of articles here and here, ground-based methods had consistently shown that the Pleiades lie about 435 light-years (133 parsecs) away. However, according to Hipparcos, the cluster has a distance of just 392 light-years (120.2 parsecs), supposedly with an error of less than 1%.

If the cluster really was 10% closer than everyone had thought, then its stars must be intrinsically dimmer than stellar models suggested. A debate ensued about whether the models or the spacecraft data were wrong. Much hung in the balance, but the discrepancy remained unresolved. The Pleiades problem remained a major embarrassment among astrometrists worldwide.

A New and Better Yardstick 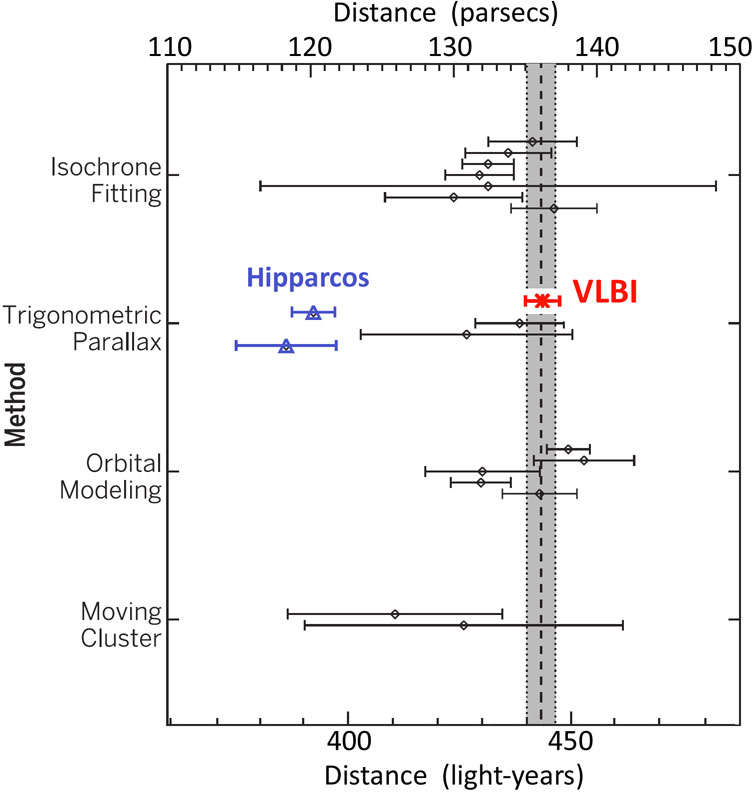 Now Carl Melis (University of California, San Diego) and others have seemingly put the matter to rest. In the August 29th issue of Science, they report distance results derived with a different and powerful method: very-long-baseline radio interferometry. They have seemingly nailed the distance at 444.0 light-years (136.2 parsecs), likewise accurate to within 1%.
The distance found by Melis’s team agrees well with previous ground-based determinations — and not with Hipparcos. If this result holds up, it’s good news for the standard models of how stars work. But astronomers must try to understand why the Hipparcos observations misjudged the distance so obviously — and whether its entire database of stellar distances is suspect.

Click here to read the full article on the Sky & Telescope web page….