THE FISHERHAVEN ASTRONOMER
THE HIGH SPRING TIDES OF CHRISTMAS 2014

Over the two day Christmas holiday many warnings about high tides were issued by local authorities and the National Sea Rescue Institute (NSRI). The question can well be asked: Were these really exceptionally high tides?
The answer lies in some basic tidal theory and the relative positions of the Sun, Moon and Earth.
According to Isaac Newton’s law of universal gravitation, bodies attract one another along the line connecting their centres; the force of attraction is proportional to the product of the masses of the two bodies and inversely proportion to the square of the distances between them. This means the following:
• The larger the bodies are, the stronger is the force of attraction; and
• the closer they are together, the stronger the force of attraction.
The tidal interaction between the Moon and the Earth is displayed in the diagram on the right. The Moon, through gravitational attraction, moves the water on the Earth’s surface towards the direction of the Moon. This causes a high tide below the Moon and this tide is known as the sub-lunar tide.
The Moon and the Earth rotate, as a binary system, around a common point of gravity. This common point of gravity is known as the barycentre of the system. The barycentre is located on the line connecting the centres of the Earth and the Moon and is situated approximately 1 700 km below the Earth’s surface. During the rotation, water on the Earth’s surface on the far-side to the Moon is pulled away from the Earth due to centrifugal force. This water also “feels” the attraction by the Moon less than the water below the Moon because of the increased distance from the Moon (the Earth’s diameter is 12 756 km). This high tide opposite to the position of the Moon is known as the antipodal tide. [“Antipode” = on the opposite side of the globe]. 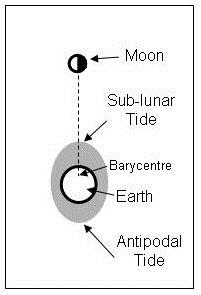 As in the case of the Moon, the Sun also exerts an attraction of the water on the Earth’s surface and causes the water level to rise. This high tide below the Sun is known as the sub-solar tide. The situation is depicted in the diagram on the left. Due to the long distance of the Sun from the Earth (approx 149 513 000 km) versus that of the proximity of the Moon (approx 384 400 km), the effect of the Sun is some what less than half that of the Moon and one can rightly say that the Moon has the overriding effect on the tides on Earth.
These three tidal components, sub-lunar tide, antipodal tide and sub-solar tide, sometimes work in unison with one another and sometimes oppose one another. Examples are the following:
During New Moon, the Sun and the Moon are relatively close together and the sub-lunar and sub-solar tides augment one another. This relatively high tide is known as a spring tide.
During Full Moon, the Moon is on the opposite side of the Earth to the Sun and the sub-solar tide and the antipodal tide augment one another. Once again this relatively high tide is known as a spring tide. 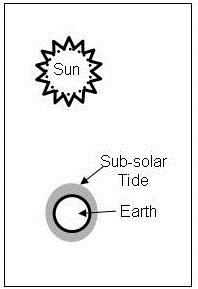 During the first and last quarter phases of the Moon, the Moon and the Sun are 90º apart as seen from Earth and these tidal components oppose one another causing lower tides. These low tides are called neap tides.
So what happened during Christmas 2014? On 24 December, the Moon was at perigee [its closest point of approach to Earth] and was a mere 364 792 km from Earth. On 24 December, the Earth was approaching perihelion [its closest point of approach to the Sun] and was a mere 147 million km from the Sun. According to Newton’s law of universal gravitation, this decrease in distances from the Earth caused very high sub-lunar and sub-solar tides. With New Moon on 23 December, this also meant that the angular separation between the Sun and Moon as seen from Earth, was quite small meaning that sub-lunar and sub-solar were very nearly exactly in phase. Voila, we experienced exceptional high tides between 23 and 25 December.
But then, how high were these tides? According to the South African Naval Hydrographer, the tidal difference between high and low water reached a maximum of approximately 1,50 metres on 24 December. During the Full Moon of 6 December, the tidal difference was approximately 1,3 metres. The Swallows amongst us will tell you that a 1,5 m tidal range is peanuts, around the UK tidal ranges normally exceed 3 metres and may be as high as 5 metres. The difference is that around the UK the seas are narrow and the volume of water moving in and out is relatively small, albeit that significant tidal currents occur to pester the mariner. In the open ocean, a 0.2 metre tidal difference is significant and a very large volume of water actually has to move every six hours to achieve this rise and fall, this causes unexpected rip-currents that endanger fishermen and swimmers. We also experienced very rough seas during this period, further increasing the danger.
Compiled by Johan Retief with information from Wikipedia and the Naval Hydrographer